rown adipose tissue, which dissipates energy as heat via the uncoupling  protein-­‐1  (UCP1),  is located in specific fat deposits or can emerge among white fat mass through the so-­‐called browning process. Several hormones, enzymes, transcription factors and micro-­‐RNAs have recently  been shown to drive the emergence of inducible brown  adipocytes  in  white  adipose  tissue.  This  study aimed to investigate whether the browning process is also controlled by the cellular metabolic environment. In particular, we evaluated the role of some metabolites and their respective receptors and transporters on recruitment and activation of brown-­‐like adipose cells. Here, we show that lactate and ketone bodies  are  robust  inducers  of  thermogenic  gene  expression  including  Ucp1  in both murine and human white differentiated adipocytes. We demonstrate that metabolites  effect on Ucp1 is mediated by intracellular redox modifications,  as a result of their transport through monocarboxylate transporters. Because this redox-­‐dependent increase in Ucp1   expression promotes  an  oxidative  phenotype with uncoupled mitochondria, browning appears as an adaptive mechanism  to  alleviate  redox pressure. Our findings open new perspectives for the control of browning of adipose tissue and its physiological  relevance. 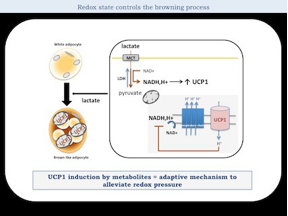