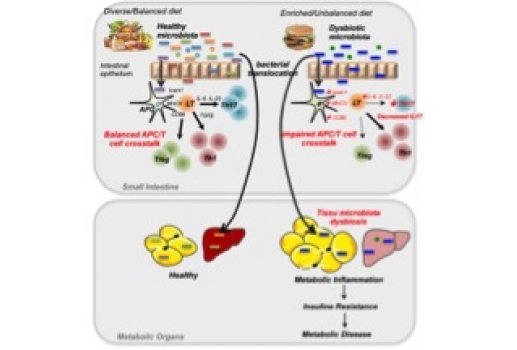 The last decade demonstrated the crucial role of gut microbiota on metabolic diseases. We first identified that the low grade metabolic inflammatory process, which induces insulin resistance and obesity, was initiated by LPS absorbed from the gut microbiota. In addition, we now discovered that gut bacteria translocate towards adipose tissue and liver to establish a tissue microbiota responsible for metabolic phenotypes. The mechanism uncovered is due to an impaired intestinal defense where the dysbiotic microbiota from diabetic mice was responsible for the impairment of the intestinal macrophage to T lymphocyte crosstalk. This impairment was restricted to Th17 and Treg cells. The adipose tissue microbiota was also dramatically impacted by the gut microbiota suggesting its important role on the onset of metabolic disease. Hence, a change in intestinal permeability and defense by the immune system is demonstrated on the top of the direct role played but a change in diet such as a fat-enriched diet on the adipose cells and insulin resistance.