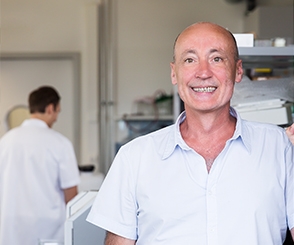 Prof. Lluis Fajas Coll was born in Barcelona, Spain. He studied Biology at the University of Barcelona were he got his Master’s degree. He next moved to the Ernst Boehringer Institute in Vienna, Austria were he did his PhD studies. After two post-doctoral stages in France in the laboratory of Prof. Auwerx at Pasteur Institute in Lille and at the IGMM in Dr. Sardet lab in Montpellier he was recruited as Inserm associated scientist at the IGBMC in Strasbourg. He next was appointed as junior group leader with an Inserm Avenir grant in Montpellier. He is now Professor at the Center for Integrative Genomics at the University of Lausanne. The main focus of his research has been the link between cell cycle regulation, proliferation and metabolism in the context of metabolic pathologies, such as obesity and diabetes and in the context of cancer.